I worked on set as a Boom Operator and got my first film credit in My Life As A Musical with the SAIT 2nd year students and worked at Corkscrew Media, a production company, cataloguing music and worked as a PA and a camera assistant on the pilot for a new TV show called New Faces on CBC.  Both won Alberta Movie and Film Awards in 2014. Alberta’s equivalent of the Oscars.

The hard work paid off.  I was accepted into the SAIT Film and Video Production Program.  I was very fortunate, only thirty were selected from over 200 applicants. From the first day I specialized  as an Audio Engineering Technician.

Since then I have worked as a Production Assistant with Joe Media on a United Way commercial, as a Guitar Tech, Video Cam Operator and Roadie for U2 Station  and another Production Assistant spot on The Real Housewives of Beverly Hills which included attending the David Foster Miracle Gala & Concert.  For a very radical change of pace, I was awarded a Shaw Communications intern ship and spent the summer of 2015 working with the news crews at Global Calgary and editing segments for the evening news.  For a bit of a joke on me, my last assignment was to produce, interview and edit for submission, a special segment commemorating Hurricane Katrina.

Over the last two years SAIT introduced me to a broad swath of the Calgary Film industry. I have been the sound recorder, mixer and boom op on over a dozen films, commercials, pilots and competitions like the CBC Comedy Coup, Telus Story Hive and Terror: The 48-Hour Film Challenge. I graduated Spring 2016 and in mid summer I left for Denmark to attend a community college in Toftlund where studied Theatre and Studio Recording and obtained a specialty certificate in AVID ProTools editing software. And why Denmark?  To satisfy my residency requirements to get my Danish passport!

Juniors was never about becoming a professional breeder or handler or groomer. As a Junior it is possible to learn about all kinds of dog breeds and readily borrow them to show in Junior events so I took on the challenge of showing 100 dog breeds before I was 18. Not enough shows to make that so cut it back to 50. I made that easily, 63. Consequently I met a lot of interesting people and confirmed there are some breeds I just would not own.

No one plans on getting sick. When it happens every one does something different to cope. Many Juniors compete for the competition, others because they always have and travel with their family to the shows and still others because they want to continue in the business in one way or another. I went to dog shows to forget about the blinding pain between my right eye and ear. I knew something was wrong in 2010 and intp 2011 it just got worse. Due to my shunt and vision issues there was no shortage of possible culprits.

In October 2011 I won the Juniors at Tradex, I won the Island Pacific Labrador Retriever Club’s door prize and Dexxter won Best of Breed over 40 some dogs and he made the cut in Group that was shown on TV. I should have been ecstatic. Instead I just wanted to go home. We drove all night and I was admitted to Calgary Children’s Hospital the next morning, for what was going to be an in out process until successful corrective surgery in August 2012 followed by year long rehab. 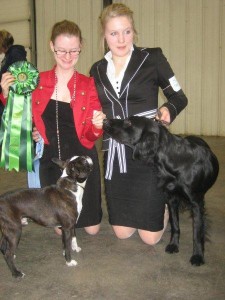 The 2012 season and the 2011 Alberta Provincial Finals were a bit of a wash. The Finals (in late spring 2012) were a few months before surgery so enthusiasm, a glowing personality and being talkative were not really high on the list. Unfortunately my illness cut into Obedience training so we didn’t place at Provincials and it was the only time during my illness I gave in and cried. Fortunately for me, Sara and Loren were there. Unfortunate it was pretty well Dexxter and my last chance at a Provincial Obedience title. 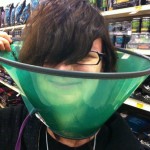 Despite the headache spanning essentially the entire 2012 year, I accumulated enough podium appearances to finish third in Alberta competition for the Arkeno award for highest accumulated aggregate points.

Oh and the Buzzzzz. It’s is the sound I feel / hear in my head when I move suddenly. Much better than a headache.