When Dexxter was a Labrador Puppy

So this is sort of the classic story of shy girl gets a Labrador puppy and all is well and they (should) live happily ever after.

At 13 I decided I wanted a dog. My parents agreed if I could sell them on it by researching what I wanted and teach them about it. No school subject has even been so thoroughly researched! I wanted a Lab and yeah I goofed a little. I said Labs don’t shed too badly. OK, not badly, he’s a yellow, the word would be constantly. Mom is still not amused.

And yes, he’s a bit larger than projected. At full breed standard height and always questionable weight, Dexxter is BIG. Until he was side by side with most of the best examples of Labrador Retrievers in Canada at Tradex in 2011 we really hadn’t noticed. 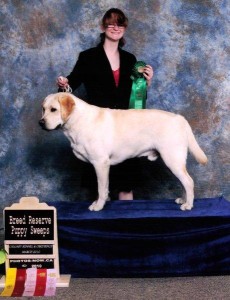 Debbie Waterer at HoboCreek was the breeder we selected as there were no Alberta yellow male Labs projected for the time window we had selected. Being a conscientious breeder she insisted I had to learn how to show him and train him before I could own him.

Judge told me if I was going to show him I need to gain 30 lbs! Dexxter was a bit rambunctious. He was better in Puppy Sweeps, we were 2nd of the 13 entered and I became a Pro Handler in my 3rd attempt earning $32. The judge told me he would have given me the win if I’d had better control of Dexxter. Good he didn’t see us the day before!