Susan Milton-Lloyd became part of our life at Handling Classes. Since then we have had a parade of Bostons through Dexxter ‘s house.  A special side benefit was we discovered Dexxter is a great big brother to them.

We cannot say enough nice and positive things about Susan, the quality of her kennel, Mackendrick Boston Terriers,  and the Bostons she produces. 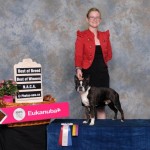 Our first house guest was Norman, Ch. MacKendricks Fire SunGlo’s Ice Wine. He is the son of Vinny, BIS BISS Ch. SunGlo’s Sparkling Wine Cooler, who was the top ranked Boston Terrier in the US in 2008.   I raised Norman, trained him to show and got him his Championship all while having the worst couple of years of my life while ill.  We were quite successful. We took back to back Best of Breed at the Battle River show March 24, 2012 in Camrose and at the NACA show in Edmonton on June 1, 2012 much to the delight of his breeder. Norman was my partner for the 2012 Alberta Junior Handling Championships. He is standing at stud at Mckendrick’s.

Tank, Mackendrick In Vino Veritas, Norman’s son, started his career with a bang at three months by taking Best B

aby Puppy in Group the first two days of the CKOC show on November 30 & December 1, 2013 in Calgary.   Becca,  Mackendrick Sangovis’n Roses, Norman’s daughter, joined her brother Tank for a debut in the Baby Puppy class.

Dexxter was instrumental in the rehab of ZZ, Ch. MacKendricks Double Back to LNSTR, who came to us after a rough period. I finished his Canadian Championship at the Lethbridge Regional Kennel Club show on November 18, 2012. At the end of November he went to his forever home in Houston, TX. He gets to hang around  a wine bar and restaurant, visit hospitals as a therapy dog and just enjoy the life of a house pet. We’ll miss him but he’s earned a chance at the good life. 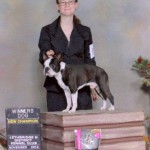 aleb, MacKendrick PNW Pretty Boy Floyd was here for some socializing before adoption. He was Dexxter’s little brother.  He was a full of personality little guy who has mastered TV time cuddling and being the kitchen help. He moved on to be a service dog in his forever home.

Another house guest was Grand Ch Mackendrick Hott’ Trot At LNSTR. Sadie had been on the American show circuit with great success. She’s was here to train for a tour of Alberta and for the 2013 Boston Terrier National Specialty. Sadie’s brother is ZZ’s father. 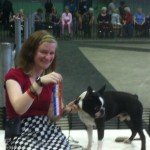 While Denver, Ch. Golden Chi Lin Denver Snow Patrol, was not a house gust, we certainly made a splash together. We swept Best of Breed at the Medicine Hat show and he became the first Swiss born Boston Terrier to attain a Canadian Championship. Our candid cell phone photo was almost instantly “liked” by breeder owner Suzanne Daniela Urban and over a hundred others across North America and throughout Europe.